In case you missed it… Melbourne Ska Orchestra will be releasing a track every week in 2018!!

Tune in every Friday.

Melbourne Ska Orchestra, the largest aggregation of its kind ever gathered on one stage anywhere in the world, have unveiled their globe-trotting video for Third Time Lucky, the latest cut to be taken from their 2013 self-titled debut album.

As readers can see below, it’s been a busy year for the fun-loving, always-skanking, 30+ piece group, comprised of some of Melbourne’s most beloved musicians, including members of John Butler Trio a la the collective’s charismatic leader, Nicky Bomba.

All the footage featured in the clip is taken from the Orchestra’s June-July trip throughout the Northern Hemisphere. The trek included several appearances at world-renowned festivals, such as the UK’s beloved Glastonbury Festival, Northern Lights Festival Boreal in Canada, and the Montreal Jazz Festival.

The band are now gearing up to close out this year’s Australasian Worldwide Music Expo in Melbourne this November. The event’s incredible finale will feature a massive party made up of all the bands whose members belong to the Melbourne Ska Orchestra – something no true ska fan will want to miss.

The AWME closing party will also be the backdrop for Nicky Bomba’s relaunch of his and Joe Camilleri’s Transmitter Records label. The outlet was forged to provide a home for reggae, ska, calypso, and world music in Australia and to provide an avenue of release for Nicky and Joe’s own compositions.

“The last couple of years has seen a great enthusiasm for our style of music and it seemed like a natural progression to step everything up,” said Nicky in a statement. Transmitter Records’ re-launch will see the label moving into a brand-new era, with an ever-expanding family of like-minded musicians.

To celebrate, Transmitter will be re-releasing gems from the label’s back catalogue, including a Bomba box set and releases by Limestone, Banana Oil, and Drums & Lions. Meanwhile, the AWME closing party will provide a showcase for new releases by Bustamento, Ska Vendors, and Mighty Duke and the Lords. 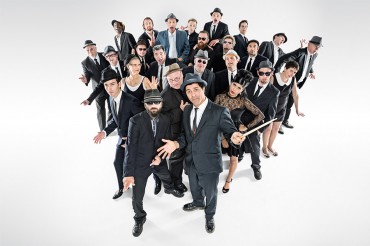