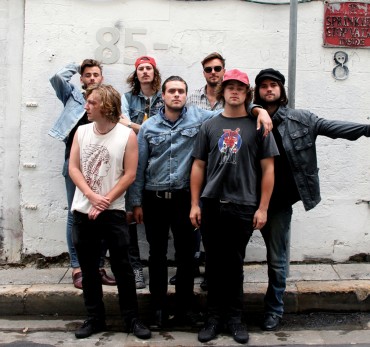 Little Bastard joins the impressive roster of Tim Rogers, The Snowdroppers, Melbourne Ska Orchestra, The Tiger & Me, Damien Dempsey, The Rumjacks and Mutiny.

Indiscriminately jumping on raised platforms with reckless abandon since 2012 Little Bastard has rapidly become one of Australia’s most entertaining and undeniable live acts.

“Nearly all members lend a hand at singing yet, when they’re not, they dance and laugh and just have a f@#%ing good time doing what they do.” – The Music

Having recently toured nationally with Joe Pug (USA), The Snowdroppers, The Beards and playing festivals such as Secret Garden, Boogie, Gum Ball, Peats Ridge and Cherry Rock it’s safe to say that Little Bastard is already a road-hardened live act.

After a recent scintillating showcase at Bigsound and an appearance at Falls Festival, Little Bastard have just finished recording their debut album at Sydney’s Jungle Studios with producer Lachlan Mitchell (The Jezabels) to be released in May 2014.

There’s a party goin’ anywhere/anytime with Little Bastard and they’ll be in your town soon to send you home a little out-of-whack.

Little Bastard debut album will be released May 2014 through FOUR | FOUR.

BE SURE TO GET WILD WITH THE BAND AT THESE UPCOMING SHOWS:

Check out the band at: www.facebook.com/littlebastardos