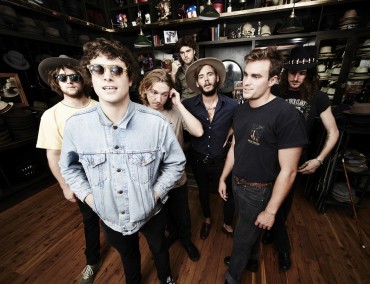 Armed with a swag of new album tracks ready to be heard for the first time, Little Bastard are hitting the highways for a national tour this June/July bringing their raucous, energetic and uninhibited ways to WA, QLD, VIC and NSW. Their turbulent stage performances are well known for getting sweaty and breathless, sending audiences home a little out-of-whack heading towards a heavy hangover.

The band took their “no-bullshit approach” into Sydney’s Jungle Studios with producer Lachlan Mitchell (The Jezabels) and smashed out their debut in just eight days. The result is 11-tracks that sonically and thematically, switch from nostalgic medium-paced anthems to deep, slow-burning ballads and the “party punk” aesthetic capturing the essence of Little Bastard live.

Having cut their teeth on the live circuit over the last couple of years playing shows with Sticky Fingers, The Snowdroppers, and Wagons, plus a few festivals including Falls, Peats Ridge, Cherry Rock, Bigsound, Boogie and Hills Are Alive, the time has come for these Bastards to headline their own national tour.
Little Bastard Album Tour 2014

Watch ‘HIGH FOR YOU’ here: youtu.be/TZaZj0CBb68

Little Bastard debut self-titled album out May 9, 2014 through FOUR | FOUR