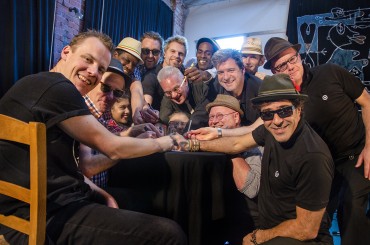 FOUR | FOUR has been very busy in recent months building up a roster that now boasts Tim Rogers, The Snowdroppers, The Tiger & Me, Damien Dempsey and Boy In A Box.

Founded in 2003 by musical dynamo Nicky Bomba and PBS FM announcer / Jamaican music historian Mohair Slim, Melbourne Ska Orchestra is dedicated to educating and entertaining audiences to the sweet sounds of Jamaican ska, roots music and the evolution of the genre.

Melbourne Ska Orchestra is fast becoming an institution in the Australian music scene with recent performances at the Byron Bay Blues Festival, WOMAD, Apollo Bay & Caloundra Music festival proving without a doubt, the international calibre of this mighty 30 piece orchestra.

An explosive celebration of music unfolds, when the 30 odd piece orchestra hits the stage. Imagine the force of more than a dozen horn players, a mean rhythm section, percussionist, 2 organists and 3 singers and you may begin to understand what the skankin powerhouse, Melbourne Ska Orchestra is.

The band are currently in the studio recording their debut album due for release in March 2013.

Melbourne Ska Orchestra are currently the face of the latest Freeview TV ad which is on high rotation across all networks with their take on the 1920s classic song “The Best Things In Life Are Free”.

The song is now available to stream: http://soundcloud.com/fourfourmusic/melbourneskaorchestra-thebestthingsinlifearefree

The song is now available to buy at iTunes also: https://itunes.apple.com/au/album/best-things-in-life-are-free/id578389219?uo=4